For West Indies, the tearaway fast bowler Oshane Thomas had the best figures of 3/54.

In their 100th international match together, the biggest trio in Bangladesh cricket stroked their way to half-centuries that paved the way for a total of 255/7 in the second match of the series versus West Indies  at Mirpur.

Tamim Iqbal got 50 off 63 balls, Mushfiqur Rahim made 62 from 80 and Shakib Al Hasan was the innings’ top-scorer with 65 from 62 after Rovman Powell put the hosts in. Mahmudullah chipped in with 30, a handy innings that added to a dominant total.

For West Indies, the tearaway fast bowler Oshane Thomas had the best figures of 3/54 while all but Roston Chase took at least one wicket.

Bangladesh found themselves in early problems after Liton Das was forced to retire hurt after being hit on the back leg. Then, a loose waft outside off stump from Imrul Kayes (0) off Thomas left the hosts at 14/1. Tamim and Mushfiqur put on 111 with the opener hitting four fours and a six in his fifty, which was followed by Mushfiqur exiting seven runs later, also edging Thomas to Shai Hope behind the stumps.

Shakib and Mahmudullah added 61, and Shakib was last out at 239/7 in 47 overs having hit six fours and a six. Liton came back to bat and was out for 8 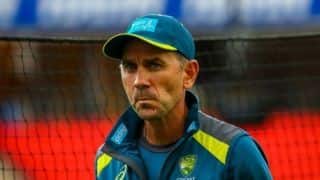