Hope reached the three-figure mark with a six off Shakib Al Hasan in the 48th over and hung in with the tail to prevent West Indies from getting all out.

Shai Hope struck a second consecutive century against Bangladesh in the third one-day international to take West Indies to 198 for 9 at the Sylhet International Stadium on Friday. Hope, coming off a sensational unbeaten 146 that led West Indies to level the series in the second ODI, struck his fourth ODI hundred and held one end while the rest of the batsmen around him struggled against a disciplined Bangladesh bowling attack, led by Mehidy Hasan’s 4 for 29.

Bangladesh won the toss and opted to bowl, a decision that majorly proved to be a correct one, considering no one barring Hope, failed to enter the 20s. The next-best was Marlon Samuels’ 19. Chandrapaul Hemraj and Hope added just 15 runs before offspinner Mehidy picked the first of his four wickets. Hope and Darren Bravo took Windies beyond 50 before Mehidy cleaned up Bravo. Samuels laboured his way to a 32-ball 19 before he was cleaned up by Saifuddin, and after that, Mehidy went through the middle-lower order.

Samuels, Shimron Hetmyer and Rovman Powell were dismissed in a span of three runs and West Indies were in danger at 99 for 5 before Hope took over and single handily assigned the scoring bit to himself. Keemo Paul chipped in with 12 off 22 down the order but once he was dismissed, the equation became tight. But Hope’s century ensured that West Indies were taken to a respectable total. 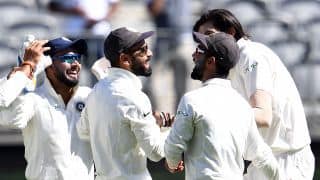