Full details of when, where and how to watch and follow updates from Match 5 of Tri-Nations series between Bangladesh and West Indies

The fifth match of the Tri-Nation series pits Bangladesh against West Indies to be played at The Village in Dublin on Monday. The last time these two teams met, over 650 runs were scored at the same venue with Bangladesh getting the better of West Indies.

Mashrafe Mortaza led Bangladesh s fightback in the field before Tamim Iqbal impressed with the bat as the Tigers enjoyed an ultimately convincing eight-wicket win over the West Indies in Dublin on Tuesday.

West Indies, for whom Shai Hope made 109, were well-placed at 205 for two in the 41st over before slumping to 261 for nine in 50 overs, with pace-bowling captain Mortaza taking three for 49.

What: Bangladesh vs West Indies

Bangladesh vs West Indies Head to Head in ODIs 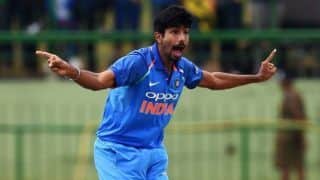