Bangladesh have drafted in the debutant offspinner Nayeem Hasam as one of four slow bowlers in the XI.

Bangladesh captain Shakib Al Hasan has returned to lead the hosts in the first Test against West Indies in Chittagong, and has won the toss and opted to bat on Thursday.

Shakib had been named in Bangladesh’s Test squad after being returning from surgery, but had been in some doubt a day before the match. The veteran allrounder was declared fit by the team s physio, but told reporters that he was unsure.

Ariful Haque, who made his debut in the last series with Zimbabwe, made way for Shakib while Soumya Sarkar came in as one of the openers. Bangladesh drafted in the debutant offspinner Nayeem Hasan, 17, as one of four slow bowlers in the XI. Shakib, Taijul Islam and Mehidy Hasan Miraz are the others. 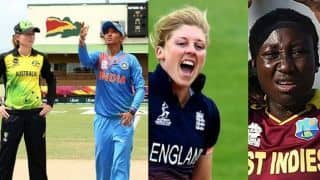