West Indies might have thumped Bangladesh in the third T20I on Saturday to clinch the series 2-1 but not before a controversial no-ball call that resulted in a heated debate.

West Indies might have thumped Bangladesh in the third T20I on Saturday to clinch the series 2-1 but not before a controversial no-ball call that resulted in a heated debate between players of the both sides and match officials.

Chasing 191, Bangladesh were given a flying start with Liton Das hammering young Windies paceman Oshane Thomas all around the park. The hosts had crossed the 50-run mark inside four overs and Liton Das two fours and as many sixes in an over of Thomas when he played one shot too many off the sixth delivery and holed out at mid-off.

However, the on-field umpire had already signalled a no-ball for overstepping resulting in a single and a free-hit.

Meanwhile, the Windies fielder seemingly spotted that Thomas hadn’t overstepped when the big screen at the ground showed replays of the delivery resulting in captain Carlos Brathwaite demanding a review. A discussion ensued bringing the proceedings to a halt.

Eventually, a review was called and the delivery was deemed legal with the on-field umpire raising his finger. However, Liton stood his ground.

Match referee Jeff Crowe rushed to the middle and a long discussion followed with Brathwaite and Bangladesh captain Shakib Al Hasan. For the second time, the decision was reversed and the original no-ball call was upheld. The commotion lasted almost 10 minutes before order was restored.

While the tourists accepted the decision, Brathwaite made it clear what he felt about the call after the match.

“The rule is that if a no-ball is called it cannot be reviewed or reversed. But if it isn’t called, it can be reversed checking the video. Everyone saw that it was not a no-ball. For a young man who is inexperienced, Oshane Thomas was under the pump. To finally get a dismissal but the ball has gone to your name as free-hit, to bowl the extra ball with an extra run, obviously it messed his mindset,” he said.

“As captain, I had to take call for the team. I had to make a stance not just for myself or the team but for West Indies cricket. We haven’t been getting favourable calls or 50/50s since I have been playing cricket. I think it showed that when we played a passionate game by doing the right things, then things happen for us, we need the officials to give what is rightfully ours.

He continued, “Again, I am not saying the officials are cheating because I think they are professionals. However, I can just call what I see. If we are seeing we are not getting the rub of the green, the 50-50s, then as captain of the ship I will say that.

“Sanctions may come and go, but if you don’t stand for something, you fall for everything. If the sanctions are to be handed, I would gladly take it. My teammates need to be stood up for and as the captain of the ship, I will stand up for them.” 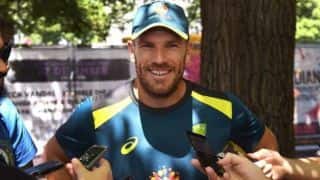