Bangladesh ended up getting bowled out for 254 earning a lead of just 14 runs in reply to Zimbabwe‘s 240 in the first innings for the first Test here at the Shere-e-Bangla stadium in Mirpur, Dhaka. Zimbabwe began there second innings on the day itself and are currently five for no loss as they trail by just nine runs.

Bangladesh, who had half of their team in hand when they went in for Tea break suffered a quick collapse as they lost five wickets in the next 65 runs. Mushfiqur Rahim, who turned out to be the highest scorer of the Bangladesh innings was dismissed for 64 off 159 balls by Panyangara. As soon as he departed, the collapse began and none of the tail-end batsmen could live up to the expectation as the team ended up getting bowled after earning a slender lead.

Zimbawean bowler, Tinashe Panyangara claimed five wickets for 59 runs to dismiss the hosts and put Zimbabwe in a comfortable position. His wickets includes the likes of Tamim Iqbal, Shamsur Rahman, Mushfiqur Rahim, Taijul Islam and Al-Amin Hossain. His bowling figure reads 23-5-59-5 with an economy of 2.56. this was his best bowling performance in international Test cricket so far, with his previous best being three for 28. Apart from him, Sikandar Raza and Tafadzwa Kamungozi too claimed a wicket each.

Zimbabwe began their second innings with opening batsmen Vusi Sibanda and Regis Chakabva coming in as night watchman with the score reading five for no loss at the end of the day’s play. 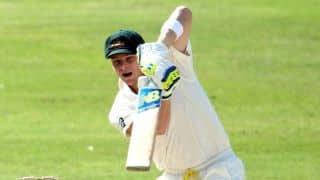