His fifty came off 48 deliveries including five boundaries and three big sixes.

Zimbabwe’s opening batsman, Hamilton Masakadza scored a half-century in the fifth and final ODI against Bangladesh at the Sher-e-Bangla National stadium in Mirpur, Dhaka. It was his 25th half-century in ODI cricket. His fifty came off 48 deliveries including five boundaries and three big sixes.

His last century was back in August against Australia at his home ground, Harare Sports Club when he score an impressive 70. He was dismissed for 52 after batting with his partner Vusi Sibanda who is currently on 27 off 34 while Zimbabwe are 88 for the loss of two with Sikandar Raza being the other man to be dismissed for a mere nine.

Catch the live blog of the 5th ODI here 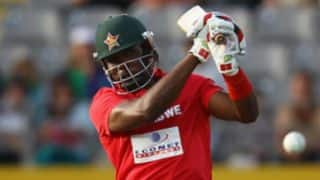