Bangladesh are currently leading the series 2-1, and will look to complete a series win.

Bangladesh and Zimbabwe clash in the fourth and final Twenty20 International (T20I) at the Sheikh Abu Naser Stadium in Khulna on Friday. Zimbabwe managed to keep themselves alive in the ongoing series with a 31-run victory in the third T20I, with all the matches being played at the same venue. Bangladesh won the first two games by four wickets and 42 runs respectively, and will look to finish the series on a 3-1 margin before preparing themselves for the more important contests with the Asia Cup and the ICC World T20 2016 in store. Zimbabwe, on the other hand, will look to level the series and gain some pride after a few nightmarish months in the recent past, in which they lost consecutive series’ to Afghanistan, both home and away. LIVE CRICKET SCORECARD: India vs Australia 2015-16, 4th T20I at Khulna

Zimbabwe have dominated the batting charts in the series so far, with three of the top four run-getters coming from the tourists’ squad. Bangladesh, however, have dominated the bowling statistics, with as many as four members of the hosts’ side featuring in the top-five wicket-takers list.

Catch the live streaming of Bangladesh vs Zimbabwe 2015-16, 3rd T20I at Khulna on starsports.com, and the live telecast of the match on Star Sports 4.

Live streaming has become a rage all over the world for cricket fans, for now one can catch the live action of a match even if (s)he is busy travelling or stuck somewhere with no access to a television. Most official broadcasters such as Star Sports offer live streaming services these days, which should be enough reason for users to avoid malicious websites that claim to offer streaming services. 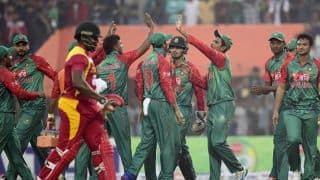