Bangladesh made a long-awaited breakthrough in their ODI series against Zimbabwe by winning the fourth of five One-Day Internationals at Queens Sports Club on Friday. 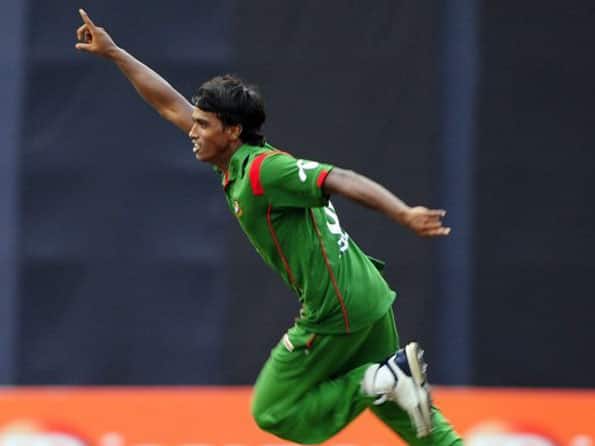 Rubel Hossain shone with the ball taking four for 31 AFP

Bangladesh made a long-awaited breakthrough in their ODI series against Zimbabwe by winning the fourth of five One-Day Internationals at Queens Sports Club on Friday.

After bowling out the home side for 199, Bangladesh coasted home, scoring 203 for four avoiding a tour whitewash as Zimbabwe lead the series 3-1. It was a welcome victory after their three previous ODI defeats and a Test reversal by the home side.

Zimbabwe were asked to bat by Shakib Al Hassan and only skipper Brendan Taylor held them together with his fourth century in ODIs, scoring a six and seven fours to reach 106. Only Elton Chigumbura stayed with him, though at fewer than a run every two balls. They put on 94 runs for the fifth wicket, Chigumbura’s share being 31.

The die was actually cast for Zimbabwe when Hamilton Masakadza was mistakenly given out caught behind by local umpire Owen Chirombe without scoring and Tatenda Taibu was run out by Nasir Hossain going for a run while partner Forbes Mtizwa stood his ground. He had managed only seven runs.

Rubel Hossain did the most damage with four wickets for 31. Mushfiqur Rahim took four catches, adding further lustre to his first ODI century at Harare on Tuesday.

Bangladesh started with fireworks in reply when Imrul Kayes and Tamim Iqbal rattled up 24 runs in the first two overs and were 45-0 at the end of the fourth. Kyle Jarvis conceded 15 runs in each of his first two overs.

Tamim went on to score 61, passing the 3,000-runs mark in internationals. It was an easy task thereafter, with incoming batsmen Siddique and Rahim taking their time over reaching the target.

The job was finished off by a rejuvenated Bangladesh, captain Shakib scoring 39 not out in a 74-run fifth-wicket partnership with Shivagoto Hom who made an undefeated 35. The final ODI will be played here on Sunday. (AFP)