The super over victory just about keeps the Cobras’ semi-final hopes alive.

A vibrant and enterprising century from the Barbados Tridents’s Jonathan Carter was in vain as the Cape Cobras registered a thrilling and crucial super over victory following a dramatic tie in Mohali on Friday. The super over victory just about keeps the Cobras’ semi-final hopes alive with one win recorded and one match still to play, but in keeping the Tridents winless after two matches this result has the effect of narrowing the likely qualifiers from Group B down to the Hobart Hurricanes, Kings XI Punjab and the Northern Knights.

An excellent over from part-time spinner Sybrand Engelbrecht helped the Cobras defend 11 in the Super Over leaving Carter, who managed just two off the final ball with three required, a broken man, splayed on the pitch, head bowed as the Cobras celebrated around him. Despite exceeding the pace of the required run rate for much of their innings, victory for the Cobras was far from certain during an unstable run-chase of 174 that threatened to implode when Robin Peterson and Dane Vilas fell to consecutive deliveries in the 17th over leaving the Ram Slam Challenge runners-up 32 from the final three overs.

Some clinical death bowling in the penultimate over that went for just five runs from Ravi Rampaul reduced the equation to 15 off the final six deliveries. A scrambled two, with keeper Shane Dowrich fumbling a run-out chance ensured the scores finished level and the first Super Over of this seasons Champions League.

Opening pairing Richard Levi and Hashim Amla had earlier laid a strong platform for the Cobras in pursuit of the Tridents 174 – the fifty being brought up in just the fourth over with 32 coming from six consecutive deliveries at one stage. However, Levi’s wicket near the end of the Powerplay shifted the momentum of the match with just 37 runs scored in six overs following Levi’s dismissal, and when number three Omphile Ramela looked to force the pace as the Cobras score approached three figures he was stumped and the match began to tighten considerably.

However it did seem that the greater international experience and wiser heads of the South African side would be enough to see them stumble to the total, but Barbados continued to pick up wickets at regular intervals, puncturing the Cobras progress towards the target.

Jeevan Mendis was the chief destroyer for the Barbados Tridents with 4-27 but fellow spinners Akeal Hosein, 1-31, and Ashley Nurse, 0-29, also bowled well. Indeed, the Tridents—Jason Holder aside who conceded 30 runs from his two overs—bowled impeccably well as a unit; Mendis, Hosein and Nurse bowling wonderfully in tandem in the middle overs as the pressure mounted but to the Cobras credit the required run rate never spiralled.

If the Tridents exceeded themselves with the ball, they let themselves down with the bat. Opener Dilshan Munaweera and Carter, batting at number four, scored 153 of the Tridents 174 runs; the deficiency in experience and class engendered by the absence of Dwayne Smith, Kieron Pollard and Shoaib Malik was all too evident as the young batting order succumbed to the wily part-time spin of Engelbrecht, 2-24, and class of international-duo Charl Langeveldt, 2-29, and Vernon Philander. 1-31.

The run out of Raymon Reifer in the third over of the Barbados Tridents’ innings was a run out indicative of the challenge facing the Caribbean team. Having had the core of their batting (Smith, Pollard and Malik) gutted by richer teams, the likes of Sri Lankan Munaweera, a last minute replacement for Smith, are unknown to the core Barbados players and such unfamiliarity was evident as Reifer and Munaweera’s yes-no-wait-oh no-run out set the Tridents back at seven for two following Shane Dowrich’s edge through to the keeper in the first over.

Carter and Munaweera then proceeded to put on 75 for the fourth wicket, a partnership that formed the balustrade of the Barbados innings. Both men went hard and fast at the ball, Carter in particular played with daring and aggression, using his feet nicely and swatting the ball with powerful wrists on the way to the second hundred of this Champions League and eighth in the tournament’s history.

If it wasn’t for Carter the Tridents would have struggled to make three figures—the third highest scored after himself and Munaweera was Mendis who managed just 10. Although, it can be said to have been apt that it was Carter, a home-grown Barbadian, who dug the Tridents out of trouble—if they are to have any success in this Champions League season, or indeed, on the global stage in the long-run they are going to need their local talent to perform at a higher level, more consistently, because today, that was the difference between the two teams. 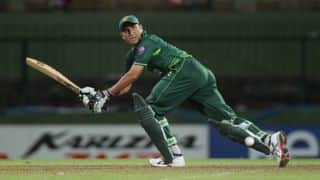 Younus Khan's outburst leads to a show cause notice by PCB