Hobart were on top, with Barbados struggling at 26 for three.

The Barbados Tridents lost three early wickets thanks to some excellent bowing by Doug Bollinger and Ben Hifenhaus. The batsmen too, never looked like getting settled and played some terrible shots. The West Indies franchise were reeling at 26 for three and had just lost the in-form Dilshan Munaweera, who played some cracking shots.

Barbados Tridents will take on Hobart Hurricanes in match 16 of the Champions League T20 (CLT20) 2014 at Mohali. The Tridents would be smarting from their Super Over loss, while the Hurricanes will be looking to get another victory and all but seal a spot for themselves in the semi-finals.

Hobart have won two of their three encounters, and barring an absolute disaster, they ought to breeze through to the semi-finals. On the other hand, Barbados are yet to open their account despite taking things down to the final over — and the Super Over on one occasion — both times. They will feel quite hard-done by their luck after doing so well for much of the games. 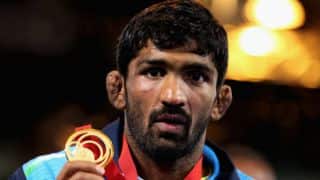