Tridents and knights are taking each other in the the last league match of this year’s CLT20.

Barbados Tridents made a decent start of their chase of 138in 19 overs against the Northern Knights to win their first match in this year’s Champion’s League T20 (CLT20). Their opening pair Dilshan Munaweera and Raymon Reifer added 31 runs in just 25 balls for the first wicket. After that the Tridents lost three quick wickets and their chase was jolted. Knights made a comeback to the match through the leg-spin of Ish Sodhi, who took two wickets in his first three overs.

Tridents and knights are taking each other in the the last league match of this year’s CLT20. Both don’t have any chance to make it to the semi-finals but they would like to finish the tournament on a high note. The match was started half an hour late because of rain in the earlier match. During the course of this match also, it was started to rain and the match had to stop for an hour. And when the game started it was reduced to 19 overs encounter.

Earlier Tridents won the toss and elected to field. Batting first Knight lose Kane Williamson early. Ravi Rampaul took his wicket. After losing his wicket Knight made steady progress with Anton Devcich and Daniel Flynn. Flynn later got out, caught behind in 11th over to Dilshan Munaweera. For Tridents, Kyle Mayers bowled an excellent spell of four overs for 17 runs.

After the rain break in the 12th over, Knights started poorly and lost two quick wickets and didn’t get any momentum in batting. Amongst Knight batsmen, Devcich and BJ Watling and skipper Flynn made important contributions to take their score to 135 after 19 overs. Tim Southee also chipped in with a handy 19 run innings which gave the New Zealand champions something to fight for.

Scott Styris, who is playing his last match of his career failed to open his account. Devcich was also unfortunate to run out at 47. Ultimately in their allotted 19 overs Knights reached 135 for eight, which score was revised through Duckworth Lewis (D/L) method and Tridents were set a target of 138 to in 19 overs to get their first win in CLT20.

The Tridents bowlers were disciplined. Specially Rampaul and captain Rayad Emrit bowled really well. Even the off spin of Dilshan Munaweera fetched two crucial wickets for them. 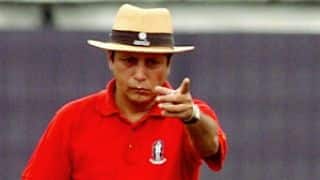 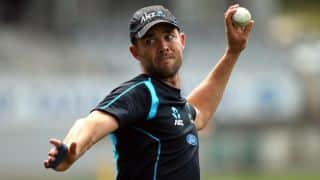