After 10 overs the Knights reached 64 for the lose of one wicket.

Barbados Tridents and Northern Knights are taking each other in the the last league match of this year’s Champion’s League T20 (CLT20). Both don’t have any chance to make it to the semi-finals but they would like to finish the tournament on a high note. The match was started half an hour late because of rain in the earlier match.

Tridents won the toss and elected to field. Batting first Knight lose Kane Williamson early. Ravi Rampaul took his wicket. After losing his wicket Knight made steady progress with Anton Devcich and Daniel Flynn.  For Tridents, Kyle Mayers bowled an excellent spell of four overs for 17 runs. After 10 overs the Knights reached 64 for the lose of one wicket. 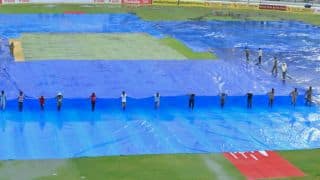