Dhaka Dynamites are now placed second in the points table with 10 points in their basket.

Dhaka Dynamites came out hard in the 29th encounter of the Bangladesh Premier League 2016-17 at Dhaka against Barisal Bulls and emerged victorious to gain two points and climb up the points table. Dhaka Dynamites are now placed second in the points table with 10 points in their basket while Barisal Bulls, on the other hand, are precariously stationed at seventh position. Chasing 133 was never a challenging task but Barisal Bulls bowlers did a decent job in dragging the game to the final over. Dhaka Dynamites chased down the total with four wickets to spare with Nasir Hossain top-scoring in the run-chase. They got off to a rocky start as Bull’s spinner Taijul Islam struck in the first over and got rid of the in form Mehedi Maruf. LIVE CRICKET UPDATES: Dhaka Dynamites vs Barisal Bulls, Match 29 at Dhaka

Kumar Sangakkara played well for his 32 and sailed the ship out of troubled waters along with Shakib Al Hasan who batted at three. Sangakkra departed for 32 and moments later, Shakib fell to Enamul Haque s persistence. They were in a delicate situation when Nasir Hossain took charge and played a crucial 34-run knock. They lost few wickets in the end but Dwayne Bravo ensure the job was done. Meanwhile, Taijul bowled well and accounted for couple of wickets to help his side pose a fight.

The Bulls got it right at the toss and opted to bat first. They did not get off to a desirable start as they lost wickets in plenty early on in the innings. Dynamites’ Abu Jayed drew the first blood in the form of Shahriar Nafees in the third over. Nafees flicked one straight to Seekkuge Prasanna in the deep, who was also the only fielder deployed there inside the Powerplay overs. Dilshan Munaweera after a solid start had to depart for 10. Jeevan Mendis was unlucky to have been denied a second run after Mushfiqur Rahim called for it and then turned down at the very last moment. Rahim and Nadif Chowdhury contributed for 47 runs between them and sailed the ship out of extreme trouble. Enamul Haque floundered with the bat during a crucial situation.

Rumman Raees got the ball rolling from the outset and played a much-needed cameo of 25 to guide his side to 132. Thisara Perera s willow was silent for 15 deliveries as he managed same number of runs with the bat. Abu Jayed had a wonderful outing with the ball and had one wicket to his name while conceding just 12 runs from his spell of four overs. Dwayne Bravo was expensive giving away 35 runs and claimed a wicket. Shakib did well until his last over, where he plundered for runs. Barisal Bulls did not have enough runs on the board to restrict the star-studded Dhaka Dynamites line-up. They were certainly short of 20 odd runs. 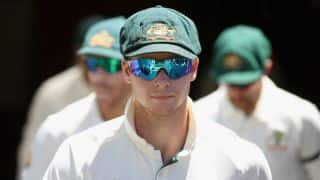