Both teams would want to get off to a winning start in the BPL 2016.

The second game of the Bangladesh Premier League (BPL) 2016 will be played between Barisal Bulls and Dhaka Dynamiyes at Shere-e-Bangla National Stadium at Dhaka. The first match of the day saw Comilla Victorians take on Chittagong Vikings at the same venue. The live cricket streaming of the match is available on Sony LIV, while the live telecast of the match is available on Sony SIX and Sony SIX HD. The streaming is also available on channelninebd.tv in Bangladesh, while the live telecast is available on Channel Nine in the nation. The BPL was supposed to start much earlier, but after a couple of days of the competition were washed out, the entire tournament was rescheduled.

This is the fourth edition of the BPL and it comprises of seven teams, organised by the Bangladesh Cricket Board (BCB). The Dhaka Dynamites will be led by all-rounder Shakib-Al-Hasan, whereas, the Barisal Bulls will be captained by Bangladesh s Test skipper Mushfiqur Rahim, who is also the wicketkeeper for this side. Shakib s side has legendary figures like Kumar Sangakkara and Mahela Jayawardene along with some T20 cricket specialists like Andre Russell, Ravi Bopara and Dwayne Bravo. Barisal Bulls too have some exciting players like West Indies T20I skipper Carlos Brathwaite, Taijul Islam and Al-Amin Hossain to name a few. Comilla Victorians are the defending champions of the tournament, having won it last year under the leadership of Bangladesh s limited-overs skipper Mashrafe Mortaza. Dhaka Dynamites have registered the most wins in the BPL with 22 wins out of their 37 matches in the tournament so far. 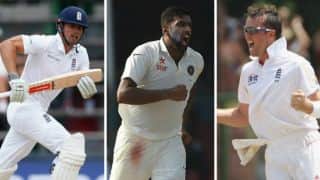