England's Barmy Army of noisy fans were left with an empty feeling as their team slipped to defeat by Pakistan inside three days in a first Test played in a ghostly 25,000-capacity Dubai Stadium. 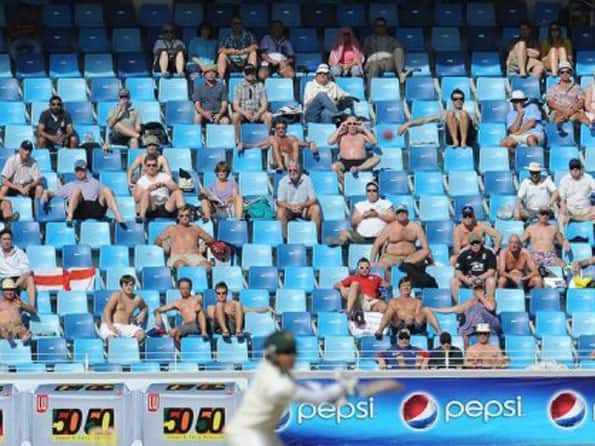 England’s Barmy Army of noisy fans were left with an empty feeling as their team slipped to defeat by Pakistan inside three days in a first Test played in a ghostly 25,000-capacity Dubai Stadium.

Dressed in England’s blue One-Day International (ODI) colours, the Barmy Army, who follow their team around the world, outnumbered the Pakistani fans who struggle to get time off from their jobs in the Gulf State.

“It’s exciting to be here in the UAE, but the stands are silent,” Graham Ffitch told AFP. “We hope to get real competition in the stands from the Indian fans when England go there in October this year.”

England will tour Sri Lanka in April and face a real challenge to maintain their world number one Test status in the sub-continent, regarded as their weak point.

Things have not started well. England crumbled against Saeed Ajmal on the first day of the first Test as the off-spinner took a career-best 7-55 to bundle the tourists out for 192.

Pakistan responded with 338, gaining a lead of 146, before England once again flopped with the bat, handing their opponents victory inside three days.

But despite England’s bad show, tour operators expect more English fans to descend on the UAE for the ODI series.

“We made all arrangements in conjunction with the tour operators to make it comfortable for the fans. We are keen in helping the promotion of sports tourism in the UAE,” Maqbul Dudhia, Dubai Sports City general manager, told Gulf News.

The second Test will be played in Abu Dhabi (January 25-29), while the third Test returns to Dubai from February 3-7. The Tests will be followed by four one-day and three Twenty20 internationals.

Some fans also lament the fact that they were deprived of going to Pakistan, as the security situation is not deemed safe enough.

“I remember going to Lahore in 2000. People in Pakistan were very courteous and the best thing apart from the cricket was the spicy food,” said Ffitch, a 52-year-old businessman.

For Essex couple Stuart and Barbra Barber, Pakistan remains an elusive destination. “My friend went there and had a lot of praise for the people and the places, but we can only go there if we get convinced about the security,” said Barbra.

Lawyer Ian Grant, from London, expects to visit Sri Lanka in April. “I had never been to the sub-continent,” said Grant. “So I am excited here and hope to travel to Sri Lanka with my friends and then to India and explore a new world.”

For the Barmy Army the tour continues, and they hope on the way they get some competition from rival fans. (AFP)