Baroda’s bowlers have been instrumental in the team’s success in this tournament.

Baroda completed a thrilling three-run win against Uttar Pradesh (UP) to win the Syed Mushtaq Ali Trophy at Wankhede Stadium on Monday. Chasing 145, UP faltered at the end falling short by three despite the 98-run third wicket stand between Prashant Gupta (68) and Eklavya Dwivedi (56).

Baroda’s bowlers have been instrumental in the team’s success this tournament. It was a blessing in disguise for them as Munaf Patel stayed through the tournament after not being picked at the Indian Premier League (IPL) auction. Lukman Meriwala has been a new find and so is Hardik Pandya. Together, these three once again started Baroda’s defence of 145 they posted. After a sedate start, it was Hardik who gave the first breakthrough on the first ball of his spell from the pavilion end dismissing Mukul Dagar caught behind.

The runs were hard to come by but centurion from the previous match, Prashant Gupta along with wicketkeeper-batsman Dwiwedi steadied the innings. The required rate was moving up but the duo chose to preserve their wickets for the onslaught later.

In comparison to Baroda’s 80 for in 10 overs, UP managed 60 at loss of one. Left-arm spinner Krunal Pandya had put a lid on the scoring but Baroda’s concern was the wickets were still in hand for UP. With their eye in, both Prashant and Dwivedi were all set to explode. Soon they started finding the gaps at ease and the ball went past the boundaries at regular intervals.

Prashant continued his good form and completed his fifty in 41 balls. The duo were ball set to finish off with match with 36 needed in 24 balls and nine wickets in hand. It was in the 17th over, Meriwala came back to dismiss Prashant for 68(53). He hit a six on the first ball over long-on and a similar shot on the next ball saw him caught in the deep by Abhijit Karambelkar.

UP’s hopes were pinned on the other set batsman Dwivedi who completed his fifty in 43 balls with a scoop shot. Munaf, bowling the 18th over then effected two wickets, that of Rinku Singh and Akshdeep Nath.

UP looked unsettled with the quick fall of wickets. And they faced a bigger blow when Dwivedi was caught by Kamran Sheikh off Meriwala’s bowling for 56(48). At that stage UP needed 13 in 9 balls. The lower order batsman all looked for the big shots where they could have dealt in singles.

With 11 needed in the last over, Rishi Arothe bowled three dot balls at the start. Just when it looked all over, but Upendra Yadav hammered the penultimate ball for a six. With four needed on the last ball, Yadav failed to connect and the Baroda’ camp- was off with their celebrations. 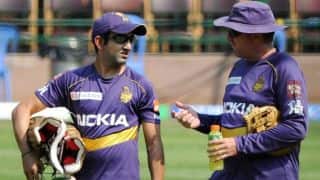 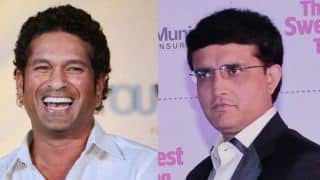