Jason Roy, 26, has played 16 T20s and 32 one-day internationals for England and has appeared in the BBL for the Sydney Thunder.

Sydney: England opener Jason Roy will play in Australia’s Big Bash League (BBL) next month for the Sydney Sixers, the club said Saturday. The South African-born Roy gives the Sixers plenty of clout at the top of the innings and joins former Australia Test star Brad Haddin and all-rounder Moises Henriques in the batting order. Roy, 26, has played 16 T20s and 32 one-day internationals for England and has appeared in the BBL for the Sydney Thunder. Sixers head coach Greg Shipperd said Roy was an excellent appointment for the club. Jason Roy is a crucial addition to our squad and is one of the world s most exciting emerging and talented T20 cricketers, Shipperd said. FULL CRICKET SCORECARD: Australia vs South Africa, 2nd Test at Hobart

Jason is known as an explosive weapon at the top of the order and will further bolster our huge potential at the top of the order”, he added. BBL news have been making rounds, with the announcement schedule for next season of BBL. It includes 35 matches in span of 40 days and the biggest match to look forward will be between Melbourne Stars and Melbourne Renegades that is set to take place on New Year s eve. Last year, Melbourne derby at MCG attracted a record crowd of 80,883 and the match tjis time could go much above this record on January 1. Although, there are no BBL matches held during Christmas. The season will begin with defending champions Sydney Thunder against Sydney Sixers at Spotless Stadium on December 20 and the final will be held on January 28, 2017. 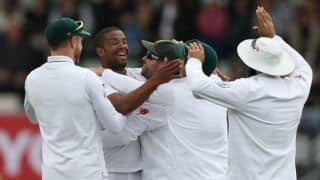