Brad Hodge has amassed 7,338 runs in this format since making his debut in 2003.

Former Adelaide Strikers captain Brad Hodge is all set to return home for this edition s BBL. Hodge has signed contract with Melbourne Renegades, whom he had played for during the inaugural edition of BBL. Hodge had mentioned 2016-17 would be his last BBL season. However, even at 42, he has decided to give BBL another run. This was perhaps triggered by the fact that he had smashed 281 runs at 130 for the Adelaide Strikers last year.

The Renegades have also signed in Jon Holland and Joe Mennie in their squad. Hodge s return to the Renegades will see the veteran will feature in a 25th season of professional cricket in Australia. Upon his return to Renegades, Hodge expressed his excitement to cricket.com.au.

It s fantastic to be back at the Renegades and I m really excited about the squad we ve put together. I ve obviously played a lot of cricket with our Coach Andrew McDonald and skipper Aaron Finch and I m looking forward to working closely with them again. I enjoyed my time in Adelaide but I m really excited about the prospect of playing in front of my home crowd again. I ve had so many memorable moments playing cricket in Melbourne and I m looking forward to adding a few more this summer with the Renegades.

One of the best T20 players

Coach Andrew McDonald on Hodge s return to Renegades: Hodgey is one of the best T20 players the game has seen so to land him is a really big boost for the team His contribution will extend well beyond runs on the scoreboard. He ll be an important sounding board for our leaders and will be able to provide some great insight for our younger squad members. The squad has come together really well. There is a strong mix of clean strikers, a versatile pace attack and some top-quality spin options. We just missed out on the finals last year and with some really good additions to the squad we ll be hoping to build on that and play some really entertaining and winning cricket. 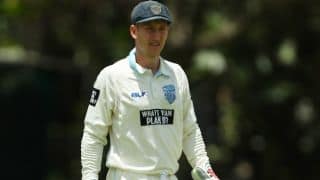