The inclusion of X-factor substitute players are among three rule changes for the 10th edition of Australia's Big Bash League.

With an aim to make the game more entertaining and exciting for the viewer – Cricket Australia has decided to introduce three new changes in the upcoming 10th edition of Big Bash League which might change the dynamics of the game. Keeping in mind that the biggest stakeholders of the sport are its viewers, CA’s decision to up the excitement level in the shortest format of the game will be put to test during BBL 2020-21. These rules are bound to increase interest in the tournament which will begin on December 10 amid the COVID-19 pandemic. The first match of BBL will be played between defending champions Sydney Sixers and Hobart Hurricanes at the Bellerive Oval on Thursday.

In this piece, we’ll briefly explain you the new rules –

1. X-factor Player: Just like football or soccer – Teams will be allowed to use one X-factor player after the 10th over of the game to replace a batter or, for the fielding team, a bowler who has bowled no more than one over. Under the traditional cricket rules, substitute players can field but aren’t allowed to bat or bowl.

2. Bash Boost: The other rule change involves a bonus competition point, to be called a ‘Bash Boost’, being awarded halfway through the second innings. The team chasing will receive the bonus point if they’re above the equivalent 10-over score of the opposition, while if they’re trailing, the fielding side will receive the point.

3. Power Surge: Another intetesting rule where the other two changes allow for a ‘power surge’ a two-over Powerplay for the batting team at any stage of the second half of an innings, when only two players will be allowed in fielding positions outside the inner-ring. To accommodate that power surge, the powerplay to start each innings will be reduced from six to four overs.

Trent Woodhill, the BBL’s player acquisition and cricket consultant, said the best T20 leagues in the world are the ones that innovate, push the boundaries and challenge the status quo.

“There’s now more emphasis on the role of the coach, more for our fans to look forward to and more for our broadcasters to speak to during each BBL game,” Woodhill said. 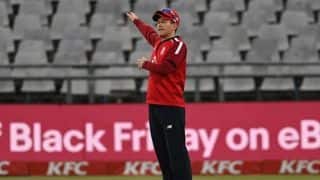