Callum Ferguson hit a whirlwind unbeaten 113 off just 53 runs to power Sydney Thunder to a six-wicket win over Perth Scorchers in Match 41 of the Big Bash League at the Perth Stadium on Thursday.

Callum Ferguson hit a whirlwind unbeaten 113 off just 53 runs to power Sydney Thunder to a six-wicket win over Perth Scorchers in Match 41 of the Big Bash League at the Perth Stadium on Thursday.

Ferguson s effort trumped Shaun Marsh s unbeaten 96 off 55 balls for Scorchers helping the team to 181/4. But Sydney chased down the target with four balls remaining with handy contribution coming from 19-year-old debutant Matthew Gilkes, who scored off 38 balls.

After the fall of skipper Shane Watson for just right runs taken by Jason Behrendorff, Gilkes and Ferguson added a massive 120 runs in just 11.1 overs to set up the match.

Gilkes was removed by Andrew Tye in the 15th over after which Sydney lost big-hitting Anton Devcich -trapped in front by Usman Qadir – followed by the wicket of in-form Daniel Sams – cleaned up by Matthew Kelly.

While Devcich and Sams added one run each, it was Ferguson who scored the remaining runs after Gilkes dismissal with the score of 138. During his knock Ferguson, his eight fours and eight sixes.

For Scorchers, only Kelly returned with respectable figures of 4-0-25-1 while Qadir was the most expensive, going for 35 in his three. Nathan Coulter-Nile returned wicketless, giving away 38 in his four overs.

Earlier, after the early loss of opener Cameron Bancroft, Perth were buoyed by 58-run stand between the Marsh brothers. Mitchell departed for 31 to Chris Green. Green proceeded to remove the in-form Ashton Turner for four.

Shaun then got the support of Hilton Cartwright (20) and Nick Hobson (15*), as he powered Perth to a formidable total, which eventually proved to be a little short. 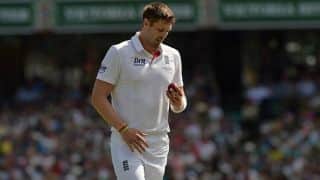