Hobart Hurricanes skipper Matthew Wade scored 52 off 37 balls to set up a six-wicket win for his team over Melbourne Stars in match seven of the Big Bash League 2018-19 at the Bellerive Oval, Hobart on Monday.

Opting to bowl first, Hobart bowlers restricted Melbourne to 155/5 before overhauling the target with eight balls remaining. Wade and fellow opener D’Arcy Short  put on 55 runs for the opening wicket before Ben McDermott (28) and George Bailey (27*) got together for a stand of 52 runs to put Hobart on track for the second successive win.

For Melbourne, their overseas star, Nepal’s Sandeep Lamichhane impressed returning a match haul of 3/24 in his four overs. Scott Boland was the only other successful bowler (1/23) for Melbourne, as they crashed to their second straight defeat.

Melbourne had a poor start with the bat losing both their openers Travis Dean (11) and Ben Dunk (10) to pace sensation Jofra Archer inside the first six overs. Nick Larkin and skipper Glenn Maxwell then combined for a stand of 87 runs with Larkin scoring 45 off 33 balls.

Larkin was removed by Short in the 15th over, before Archer came back for his second spell to pluck out Maxwell in the next over for 47. Marcus Stoinis then hit 22 off 15 balls to take Melbourne to 155/5. 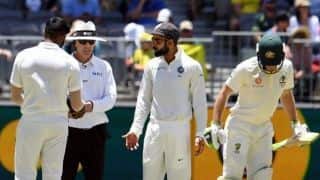