Josh Philippe and James Vince scored dominating half-centuries as Sydney Sixers hunted down 173 with nearly three overs to spare against Hobart Hurricanes in a Big Bash League clash on Wednesday.

With their nine-wicket win over the current table-toppers, Sixers have climbed up to the second spot. Philippe scored an 86 not out while Vince remained unbeaten on 74.

Sixers’ chase didn’t have the best of the starts as they lost opener Daniel Hughes (6) off the fourth delivery of their innings. That brought together Philippe and Vince and the duo built an unbroken partnership of 167 runs to seal a crushing win.

Philippe was in some mood as he reached his maiden BBL fifty off just 25 deliveries. He struck nine fours and three sixes and, also hit the winning runs. Vince belted six fours and two sixes.

Put in to bat at the Sydney Cricket Ground, openers Matthew Wade and D’Arcy Short led a solid start for Hurricanes, adding 67 runs between them. Ben Manenti broke the stand when he had Short hole out on 32. The visitors were dealt another blow six runs later when Ben Dwarshuis bowled Caleb Jewell for 1.

However, Wade went on to score his half-century and in the company of Ben McDermott (41), kept the scoreboard ticking. He fell in the 18th over after scoring 64 off 51 with the help of four fours and two sixes.

Veteran George Bailey provide the late surge smashing an unbeaten 22 off just 9 deliveries to push the final total to 172/4 but it wasn’t enough. 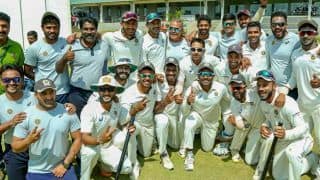