The match was called off with no change in status; each team was awarded a single point.

Fuming Sydney Thunder coach Shane Bond has urged a review of the rules after farcical scenes in Australia’s Big Bash League when a game was abandoned after the lights went out.

The Thunder had plundered 186/4 against Brisbane Heat in the Twenty20 competition on Thursday evening, anchored by a century from veteran Shane Watson.

In reply, the Heat were reeling at 10/2 in pursuit when two floodlights failed in one part of the Gabba — which is due to host a day-night Test next week between Australia and Sri Lanka. After an hour of waiting the match was abandoned and the points split, but Bond felt the lighting was sufficient to carry on.

“There are grounds around the world that have worse lighting even with this light tower out, so that was disappointing,” he told reporters. “It’s a bad look for the competition and I think there needs to be some reflection or review … particularly when you have the ability to finish a game of cricket.”

Bond said the match could have been reduced to a 15-over game “which I think everyone would’ve been happy with”.

“We made an offer. We said we would in good faith play the entire (rest of the) game and bowl only our spinners. But then the excuse from the match referee and umpires was that conditions were now unsafe.” 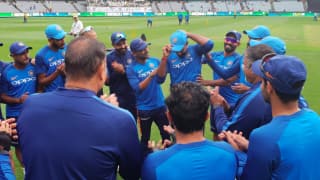