With bowling coach Heath Streak's contract about to end, the BCB is looking for a suitable replacement for the former Zimbabwean fast bowler.

The BCB is taking measures in case Streak opts to leave. “We always want a settled unit for our coaching staff, so we actually wanted Streak to stay. But if he wants to leave, we will not try to hold him back,” Akram said. “The outcome of forcing someone to stay is never good. Rather we will try to bring someone even better. For now, our list of choices includes Champaka, Aaqib, Vaas, Prasad and 2-3 others. We believe bringing any one of them will be great. But we have not sent out any proposal as Streak is yet to officially tell us anything. We will make a move according to the situation,” he added. Heath Streak confident of suspended pacer Taskin Ahmed’s return to action in international cricket

According to reports, Ramanayake is BCB’s top choice. The former Sri Lanka pacer was the Bangladesh bowling coach for a two-year tenure from March 2008. He is considered the best bowling mentor for the team. But the board decided against keeping him after he had asked for a raise at the end of his two-year term. The BCB had faced harsh criticism for letting him go. BCB lift ban on Shahadat Hossain

Sri Lanka then employed the 51-year-old coach in several spells, with the latest being in 2015. The Sri Lankan board wanted Ramanayake as a long-term bowling coach but he was unwilling to go abroad with the team due to family issues. Former Pakistan fast bowler Javed ended a successful term at the United Arab Emirates in April. He may take up the post of director of cricket at Lahore Qalandars but it is yet to be confirmed.

Vaas, on the other hand, has no permanent employment since his short tenure as Sri Lanka’s bowling coach while former Indian pacer Prasad, too, is popular for his exploits as bowling coach. Streak was appointed as Bangladesh’s bowling coach in May 2014 on a two-year contract but the agreement was a bit unusual. The contract stated he would have to work 450 days in these two years and additional payment would be necessary for extra working days.

He is the bowling coach of Gujarat Lions in the ongoing Indian Premier League. The BCB, however, is looking forward to a new contract with head coach Chandika Hathurusingha. “We are about to finalise details with the coach [Hathurusingha]. He is willing to stay. His salary will definitely be raised in the new contract as per board rules. The final decision will be made in the board meeting,” Akram said. 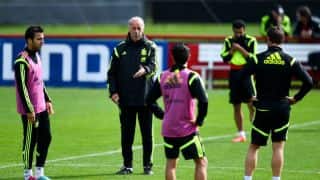