"Completely bewildering that a democratically and duly elected body is destabilised within minutes."

The turf war between the suspended Rajasthan Cricket Association (RCA) and the Board of Control for Cricket in India (BCCI) escalated on Thursday with RCA Deputy President Mehmood Abdi accusing the Board of acting in the most unfair manner to satisfy the “vengeance, hate and prejudicial grudge” carried by N Srinivasan against Lalit Modi.

A day after BCCI claimed that it acted as per rules in suspending RCA after the Modi was elected its President by a landslide margin despite being banned for life, Abdi said the parent body’s actions were baffling. “The action of the BCCI speaks volumes about its sheer arrogance and utter disregard for the law of the land and public sentiment, as it has demonstrated with the ban on the RCA in a most unfair and undemocratic manner,” he said in a statement.

“It is completely bewildering that a democratically and duly elected body is destabilised within minutes of it being elected at the whim of the BCCI,” he added. Training his guns at Srinivasan, who has been forced to step aside as BCCI President due to the ongoing Supreme Court-monitored probe into the IPL betting scandal, Abdi said the Board is still being run by him.

“It is unfortunate that the individual centric attitude of the BCCI has led to such an impasse, that it stands currently at the lowest ebb of its credibility. Especially, since the BCCI has chosen to amend its bye-laws just to suit one Mr. N Srinivasan several times and that too within a short span of five years,” he alleged.

“It definitely seems that the BCCI has different rules for different individuals, as the democratically elected RCA Committee is suspended simply to stall the return of one Mr. Lalit Modi. You show me the man and I will show you the rule, thus, seems to be the dictum of business at the BCCI. It is absolutely clear that Mr. N Srinivasan is still calling the shots within the BCCI as the spate of vengeance, hate and prejudicial grudge carried by the man is clearly reflected in the singular act of suspending the RCA in such a shameful and summary manner,” Abdi stated.

Abdi said interim BCCI chief Shivlal Yadav does not seem to have any hold over the body. “It is thus, amply clear that Mr. Shiv Lal Yadav is the hand-puppet for Mr. N Srinivasan. Being an interim President Mr Yadav has no right to take steps for the affiliation or disaffiliation of any member State Association. Affiliation and disaffiliation is the power of the general house of the Board,” he said.

“The interim President seems to have acted at the behest of His Masters Voice and in undue haste without taking the members of BCCI into confidence,” claimed Abdi. Abdi said the Board has acted unilaterally without even bothering to call a working committee meet to discuss the matter. “…it is shocking that giving a complete miss to all the norms of democratic due process Mr. Shivlal Yadav and Mr.

Sanjay Patel without calling at least the working committee to discuss the action to be taken in respect of RCA both President and Secretary proceeded to act against the RCA in a most arbitrary and summary manner,” he said.

“BCCI cannot appoint any ad-hoc committee to replace the duly elected RCA. Under the Rajasthan Sports Act, it is only the Registrar of Co-operative Societies who can appoint an ad-hoc committee that too for failure of the sports association to comply with the provisions of the Sports Act.

Abdi said RCA was not bound to follow BCCI bye-laws. “Though the RCA is a constituent member of the BCCI it is no way subservient to the BCCI. Especially since it is governed by the Sports Act under which Mr. Lalit Modi has not earned any disqualification. In case of a clash between a law (Sports Act) and private contract (BCCI bye laws) the law will prevail,” he said.

“Mr. Sanjay Patel who himself has been suspended by the Baroda Cricket Association for violation its bye laws is suspending the RCA which is an irony. If anybody is to be acted upon, it should be Mr. Yadav who has anti-corruption unit cases pending against him for misappropriation of hundreds of crores of funds meant for a cricket stadium in Hyderabad,” he alleged. 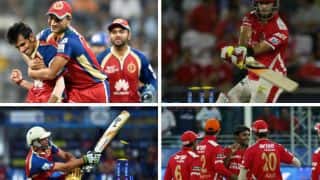