Former ICC President Ehsan Mani has advised the Pakistan Cricket Board to stop "wasting time" in trying to convince the BCCI for resumption of bilateral cricket ties between the two countries. 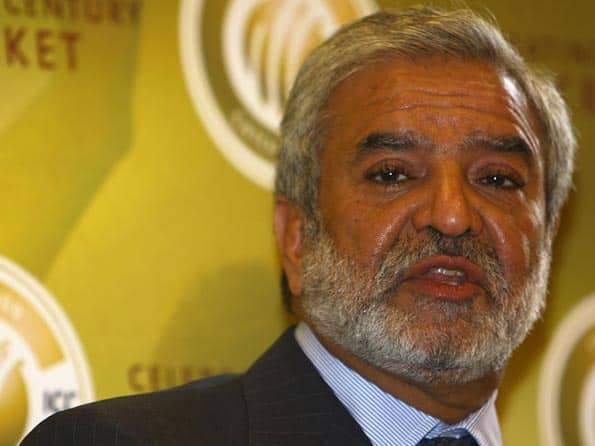 Former ICC President Ehsan Mani feels instead of pursuing BCCI, the PCB should instead try to get the Indian government give clearance for bilateral matches Getty Images

Former ICC President Ehsan Mani has advised the Pakistan Cricket Board to stop “wasting time” in trying to convince the BCCI for resumption of bilateral cricket ties between the two countries.

“Instead of running after the Indian board and trying to convince them, the PCB should utilise its energies in seeking government help and support in order to get bilateral ties resumed,” he said.

Mani said efforts needed to be made to get the Indian government to give clearance for bilateral matches.

“That is why this matter has to be resolved at the political and government level and not by the boards. It is important for Pakistan and India to play cricket but this is something for the politicians to realise,” he added.

Since Zaka Ashraf took over as Chairman, PCB has made several attempts to convince the BCCI to give a go ahead for Pakistan’s scheduled tour to India next year which has now been shelved due to various reasons mainly the organisation of the Asia Cup in Bangladesh in March.

Mani said it was most unfortunate that Pakistan was not getting any international cricket.

“I think the ICC need to do more to get teams to now play in Pakistan. That is why it is good that the PCB has also taken the initiative by inviting Bangladesh,” he said.

“It is time international teams played in Pakistan which is a nation of 180 million people most of whom are passionate about cricket and deserve to see international cricket at home,” he added.

PCB has sent its Chief Operating Officer Subhan Ahmad to Dhaka to convince their Cricket Board to send a security delegation to Pakistan ahead of the series to be held in April. (PTI)

Harbhajan Singh elated to be part of "Ring Ka King"