A senior BCCI functionary raised a situation that he described as a travesty for the BCCI.

The BCCI CEO Rahul Johri, who is paid an annual gross salary of Rs. 5,76,36,000 crore other than the allowances and other benefits, has requested the Supreme Court-appointed Committee of Administrators (CoA) to look into his increment process and the same is set to be discussed during the meeting of the committee on May 21.

With CoA chief Vinod Rai giving the go-ahead to Johri’s request for immediate attention, the matter is set to be brought up when the three committee members – Rai, Diana Edulji and Ravi Thodge meet on Tuesday.

As per the contract of the CEO, the performance of the executive (Johri) was to be evaluated annually and increments were to be in the form of variables linked with increase in revenue of BCCI out of the efforts of the executive.

A senior BCCI functionary raised a situation that he described as a travesty for the BCCI.

“This is a travesty. The Lodha Committee recommendations and the orders of the Supreme Court gave the authority to sign contracts for and on behalf of the BCCI to the secretary of the board. In terms of all legal matters as well, the board is to sue and be sued in the name of the secretary. Presently, the CoA got a constitution registered that is not in accordance with the orders of the Supreme Court and that coupled with the directions issued by the CoA mean that the contracts are executed by the CEO on behalf of the BCCI and it is the CEO that is looking after all legal matters with the might of a big law firm firmly behind him.

“So, if the CoA decides that the agreement with the CEO should be modified, will we see a scenario where Rahul Johri will sign both on behalf of the BCCI and on his own behalf?

“So here you have this employee, who did not allow for targets to be set, who did not tell the house how such a huge cost to the organisation in employing him would be justified but when the exiting value appreciated, wishes to earn money off the efforts of other people.” 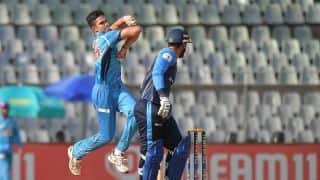