India A beat Australia A by four wickets in Chennai on Friday.

The Board of Control for Cricket in India (BCCI) congratulates the India A team on winning the tri-series involving – Australia A and South Africa A. While congratulating, BCCI President, Mr. Jagmohan Dalmiya said, “ODI series win against Zimbabwe by the young Indian team last month and this tri-series win by India A today further establishes the fact that India is well prepared for the long season ahead. I also must congratulate Mr. Rahul Dravid for this victory. While we always believed that we have quality talent available, with Rahul’s involvement we could create an environment where it is like a learning curve for the upcoming players apart from it being a platform to showcase their talent.”

The Secretary of the BCCI, Mr. Anurag Thakur also believes the same and he said, “BCCI wants to ensure that the young players get adequately groomed in order to make certain that we have a strong bench-strength which is a determining factor in modern day cricket. Events like these act like foundation from where to form a pool of players who could be groomed to graduate onto the next level.” READ: Gurkeerat Singh, spinners steer India A to series-clinching win in Chennai

“Even during tri-series, mental toughness of the players was tested. After a loss, the management and players took stock of where they were and how they fell short. And it is indeed a sense of contentment that they could emerge as champions in the end”, said Mr. Thakur, lauding the India ‘A’ team’s efforts and achievements. 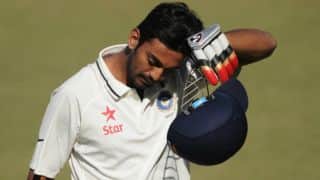