The turf war between the Supreme Court appointed committee led by Vinod Rai and CEO Rahul Johri against the three principal office bearers is getting uglier by the day.

Cornered by the Committee of Administrators (CoA), the BCCI acting secretary Amitabh Chaudhary today hit back by granting a three-month extension to GM (Game Development) Professor Ratnakar Shetty. However a question mark will remain on the validity of Shetty’s extension letter as it doesn’t have approval of CoA chief Vinod Rai.

The CoA while granting two-month extension to former ACU chief Neeraj Kumar had turned down acting secretary Chaudhary’s request of granting extension to Shetty, who has been associated with board for over three decades. As a result, an irate Chaudhary had decided not to sign new ACU chief Ajit Singh’s appointment, which the CEO Rahul Johri cleared on CoA’s directive.

However today, when the BCCI’s home series media auction was being held, acting secretary Chaudhary sent a letter to Shetty, clearing his extension. This was done in consultation with acting president CK Khanna and treasurer Aniruddh Chaudhry.

The copy of this email is in possession of PTI and it has also been sent to the CoA. “The office bearers of BCCI jointly concur with the honourable Committee in recognising your invaluable services to the BCCI and also the immense value you add to this organization with your knowledge and experience of Cricket administration and feel it would be imperative for the organisation to have benefit of your services during this period of transformation,” the letter said.

“Accordingly, your contract is being extended till 30th of June, 2018 on behalf of board on the same terms and conditions.”

The turf war between the Supreme Court appointed committee led by Vinod Rai and CEO Rahul Johri against the three principal office bearers is getting uglier by the day with all communication channels closed. The March 15 diktat by Rai effectively stripped office bearers of any executive powers, forcing them to report to the CEO.

While the Supreme Court had directed the CoA to implement new constitution in line with Lodha Panel recommendation, Vinod Rai and especially Diana Edulji’s alleged role in running day-to-day affairs has been repeatedly questioned by the office bearers.

Treasurer Aniruddh is now not kept on loop in any of the financial decisions with his powers being given to Chief Financial Officer Santosh Rangnekar.

Former Jharkhand top cop Amitabh was praised by COA during one of its earlier status reports filed in Supreme Court but the conflict with CEO Johri is now out in the open as to who takes a call on policy decisions of BCCI. 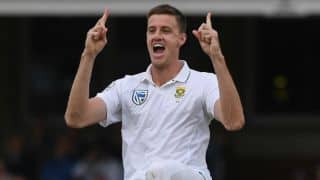