Chandila is yet to receive a sanction as he was the last player to get bail.

The Board of Control for Cricket in India (BCCI) disciplinary committee has given former Rajasthan Royals off-spinner Ajit Chandila time till March 12 to submit his written reply after the Board’s Anti-Corruption Unit chief Ravi Sawani has found him guilty of spot-fixing during last year’s Indian Premier League (IPL).

Chandila appeared before the BCCI disciplinary committee, comprising president N Srinivasan, Rajeev Shukla and Shivlal Yadav on Wednesday at New Delhi and placed his defence on the charges levelled against him.

“The disciplinary committee decided to agree to the request of Ajit Chandila and has given additional time until 12th March 2014, to submit his final written reply,” BCCI secretary Sanjay Patel said in the statement.

Chandila, however, cried innocence but he looked prepared for the worst.

“No one is backing me. I know what their decision will be, probably I will be banned for life. But I haven’t done anything wrong,” Chandila told reporters while leaving ITC Maurya, the venue of the meeting.

“They have asked me to give my reply in writing by March 12 and I will do that. Let’s see what happens after that,” he added.

Chandila along with fellow Rajasthan Royals teammates S Sreesanth, Ankeet Chavan, Amit Singh and Siddharth Trivedi were found guilty by Sawani for their involvement in spot-fixing.

The disciplinary committee banned Sreesanth and Chavan for life, Trivedi for 12 months, while Amit Singh was banned for five years.

Chandila is the only one who has not received a sanction yet as he was the last of the players to get bail in the IPL spot-fixing case. 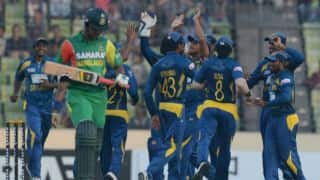 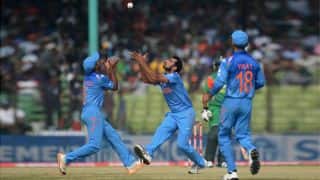