Harmanpreet Kaur won the inaugural award for Best International Cricketer Female, while Smriti Mandhana won it for the second season. Virat Kohli won the male counterpart for both years.

The Board of Control for Cricket in India (BCCI) will honour Virat Kohli with the Polly Umrigar Award for Best International Cricketer for both 2016-17 and 2017-18. Harmanpreet Kaur will be the inaugural recipient of the Best International Cricketer of the Year Female, for 2016-17. Smriti Mandhana will be honoured with the same for her performances in 2017-18. The awards will be given out at the BCCI Awards Ceremony at Bengaluru on June 12, 2018. BCCI announced the same on their website today.

BCCI has rechristened four awards in remembrance of Jagmohan Dalmiya. The recipients will be the leading run-scorer and wicket-taker in the Under-16 Vijay Vijay Merchant Trophy and to the Best Junior and Senior Cricketers in women s cricket. BCCI has also raised prize money for nine categories from INR 50 thousands to INR 1.5 lakhs.

Anshuman Gaekwad and Pankaj Roy (posthumously) will be honoured with the prestigious Col. CK Nayudu Lifetime Achievement Awards for 2016-17 and 2017-18 respectively. Here is the full list of awards:

Vinod Rai, Chairman, CoA, said: I congratulate all the winners of the BCCI Annual Awards. The last two years have been fabulous for Indian Cricket with both the men and women s teams doing very well. We are proud of their achievements and this is our small way of acknowledging their on-field efforts.

Diana Edulji, member, CoA, said: This year we will be presenting awards for the past two seasons and it is going to be a big occasion ahead of the historic Test against Afghanistan. For the first time, an award category for the best International Cricketer (Woman) has been introduced and it is a step in the right direction. Edulji, nominated for Lifetime Achievement Award for Women, declined the award.

BCCI Acting President CK Khanna said: The BCCI Annual Awards is an occasion where former greats of the game, the present generation and the stars of tomorrow come under one roof. For BCCI, it is an opportunity to show its gratitude towards cricketers who enrich this game with their skills and hard work.

BCCI CEO Rahul Johri said: Every year we have champion players delivering champion performances. Awards help boost a player’s confidence and we only hope that we get more noteworthy performances in the season to follow. Justin Langer: Lord's is the best place on Earth 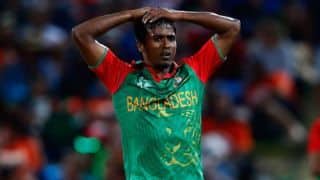