Indian cricket board is reported to have stuck to its demand during the meetings with ICC Chairman Shashank Manohar.

Whether the Board of Control for Cricket in India (BCCI) receives its share of US$ 570 million or not is something that remains to be seen, but the Indian cricket board is reported to have stuck to its demand during the meetings with ICC Chairman Shashank Manohar. The BCCI was set to get a share of $290 million as per the ICC model which is under consideration, but the Indian board was not satisfied with it. To counter BCCI s demand, Manohar even proposed another $100 million, taking India s share close to $400 million. The BCCI, however, wants that revenue which it was slated to receive from the ICC under the Big Three model.

According to ESPNCricinfo, BCCI secretary Amitabh Choudhury, who is also known as a loyalist to the former BCCI President N Srinivasan, is representing the Indian cricket board in its meetings with the ICC this week in Dubai. The ICC wants to put a new constitution in place for that to happen, it will need BCCI s nod to the new financial model which is important to the governance changes which have already been agreed upon. The BCCI, on its part, wants to defer these changes at least till the end of June 2017.

“There is an approximate number which is a $100 million more than what the ICC has proposed. (In February) the ICC offered $289 million. Now he is willing it take up by a 100 more. Then you are home. You are within a striking distance of a deal, said an official who has been aware of the meetings.

It all depends on how Choudhury goes about his job over the next two days, as a section of the BCCI wants to stick to the Big-Three model despite the CoA showing interest in finding a middle ground.

The report added that Manohar had offered the Committee of Administrators (CoA) revenue of $400 million, and had passed the details to Choudhury. The BCCI secretary and its treasurer, Anirudh Chaudhary, have spoken with the other nine Full Members of the ICC and have said the Indian board wants $570 million as revenue, without any cut in their share.

BCCI s offer implies removal of the shares allotted to Ireland and Afghanistan, and has proposed that they must be inducted as the Full Members from 2019. In BCCI s offer, it would get around $280 million more. But in the model proposed by Manohar, Ireland and Afghanistan were allotted $60 million each over eight years, only after they were inducted as Full Members. The topic will be up for discussion during the ICC board meeting on April 26 and 27. 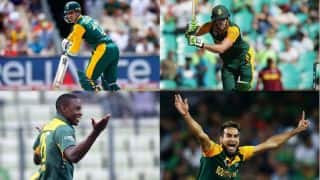