Hitting out at the scandal-hit Indian Premier League's (IPL) critics, BCCI Joint Secretary Anurag Thakur on Friday said former players, who are lambasting the event in the wake of the ongoing spot-fixing controversy, are themselves minting money from the cash-rich league. 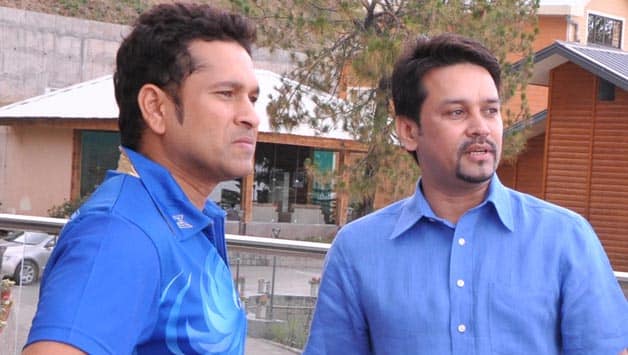 Hitting out at the scandal-hit Indian Premier League‘s (IPL) critics, BCCI Joint Secretary Anurag Thakur on Friday said former players, who are lambasting the event in the wake of the ongoing spot-fixing controversy, are themselves minting money from the cash-rich league.

“Even ex-cricketers are earning crores of rupees…they are getting handsome amounts from it and still criticising it.

“If they consider it bad money, they should not receive it,” said Thakur when asked about the flak that the league is drawing right now.

The players, who have been suspended by the BCCI, were brought to Delhi and charged under section 420 (cheating) and 120-B (criminal conspiracy) of the Indian Penal Code (IPC).

Thakur said BCCI will wait for evidence from the police before deciding the quantum of punishment to handed down to the errant players.

“We have already suspended the three players arrested by Delhi Police on Thursday. We are waiting for the evidence from the police to go further in punishing them,” he said.

Thakur, however, admitted that law does not permit for severe punishment cases like spot-fixing.

“We are depending on the law of British era. We need a change in them. We can’t comment further till we get the evidence,” he said.

On another note Thakur claimed the IPL has helped take the scenic beauty of Dharamsala to over 190 countries.

He said the state government should provide better roads and air link to the city.

Thakur said Mumbai Indians batsman Sachin Tendulkar, who is in city for an IPL match against Kings XI Punjab, has been left mesmerised by Dharamsala’s beauty.