Proposal to use DRS in the IPL minus the Leg Before Wicket (LBW) referrals is a possibility says IPL Governing Council chairman Rajeev Shukla.

Mumbai: A staunch and consistent opponent of the controversial Decision Review System, the BCCI for the first time ever could use the technology with some changes in this year’s Indian Premier League. “There is a proposal to use DRS in the IPL minus the Leg Before Wicket (LBW) referrals. We have just started discussing it,” said IPL Governing Council chairman Rajeev Shukla after its meeting. Some signs of acceptance of DRS without the ball tracking technology for LBW referrals have already come from BCCI president Shashank Manohar, also the chairman of the ICC. LIVE CRICKET SCORECARD: India vs Australia 2015-16, 2nd T20I at Melbourne

This is a significant change from the earlier stand against the DRS adopted by the BCCI and its World Cup winning captain Mahendra Singh Dhoni in the past. Dhoni has repeatedly asked for a fool proof system while opposing DRS. However, with several decisions going against India in successive Test and ODI series in the absence of DRS, the BCCI officials might have felt the need of using it. Live Cricket Blog: India vs Australia 2015-16, 2nd T20I at Melbourne

During the recently-concluded five-match ODI series between India and Australia, India were hurt because of the absence of DRS. India were at the receiving end of a bad decision during the first one-dayer when George Bailey clearly nicked one off Barinder Sran to Mahendra Singh Dhoni off the first ball and was ruled not out. Australia were 21 for two then and Bailey scored a century to win the match. In the third match also, Bailey was adjudged not out due to lack of the technology.

Meanwhile, the controversial spider cam, which has been criticised by Dhoni, would be used during the upcoming World Twenty20 Championship. BCCI may implement DRS during IPL 2016 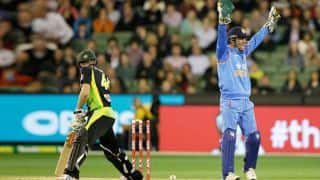