Srinivasan will attend the meeting as the representative of the Tamil Nadu cricket association.

A group of Board of Control for Cricket in India (BCCI) members have reportedly suggested that they are not keen on having former board Chief N. Srinivasan in Friday’s working committee meeting in Kolkata. The committee, which holds the most of the BCCI’s decision making power, will discuss the suggestions made by the Indian Premier league (IPL) working group formed to chalk out a road map for the troubled league where the main discussion will revolve around the future of Chennai Super Kings (CSK) and Rajasthan Royals (RR), which have been suspended for two years by the Lodha committee. Poll: Should Karun Nair play in 3rd Test against Sri Lanka at Colombo?

Meanwhile, the IPL governing council is expected to have a meeting on Thursday.

Srinivasan, who has been asked by the apex court to stay away from all board activities, will attend the meeting as the representative of the Tamil Nadu cricket association. After his axing, the trouble on him increased when his son-in-law Gurunath Meiyappan was arrested for betting in the IPL and has been slapped with a life ban from all the cricketing activities.

According to a report from DNA, a senior official belonging to Sharad Pawar’s alliance said: “The BCCI should deny entry to Srinivasan. After all, the case is pending in the Supreme Court. His conflict of interest has been established. The BCCI has every right to stop him from attending Friday’s meeting. They must ask the TNCA to send another representative.” READ: Dilip Vengsarkar elected President of Association of Indian Statisticians and Scorers of India

The board had refused entry to a representative of the Baroda Cricket Association during a meeting in Kolkata om April 26. They can stop Srinivasan as well and if that doesn’t happen, there is high possibility for the BCCI members walking out of the meeting if the board doesn’t stop Srinivasan rom attending the meeting. 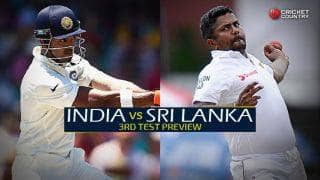