In June this year Gupta was handed a retrospective eight-month doping ban by the BCCI, after his urine sample - provided as part of the BCCI's testing programme on January 15 - was found to contain Terbutaline

Punjab wicket-keeper batsman Abhishek Gupta,  serving an eight-month ban for a doping violation, has been named by the BCCI in the India Red squad for the Duleep Trophy to be played between August 17 and September 8.

In June this year Gupta was handed a retrospective eight-month doping ban by the BCCI, after his urine sample – provided as part of the BCCI’s testing programme on January 15 – was found to contain Terbutaline, which is among the World Anti-Doping Agency’s (WADA) list of prohibited substance and was provisionally suspended on January 17.

After Gupta revealed that he has taken the substance inadvertently, as part of medication prescribed by his doctor, the board decided back-date the start of the suspension to January 15, 2018.

However, the 27-year-old’s eight-month ban is set to expire only on September 14 – that is, after the conclusion of the forthcoming Duleep Trophy.

As per a report in cricinfo.com, the selection committee will soon name a replacement for Gupta.

Gupta, who made his First-Class debut in 2017, has so far played six FC games scoring 471 runs with a highest-score of 202* (on debut) at an average of 52.33. The Jalandhar-born player has also represented Punjab in nine List-A games and six T20 games. He was tested positive while playing in the Syed Mushtaq Ali Trophy earlier this year.

Earlier in the day,  the All-India Senior Selection Committee met in Kolkata to pick India A squad for the upcoming four-day games against South Africa ‘A’ and a Quadrangular series featuring India A and B side along with South Africa A and Australia A. The committee had also picked the teams for the upcoming Duleep Trophy, 2018-19. The squads are given below.

Squad for quadrangular series vs SA ‘A’ & Aus ‘A’ 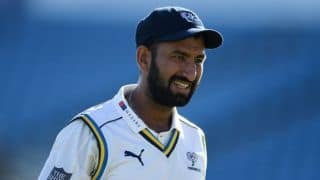