The Income tax department carried out almost 15-hour long raid surveying documents in the headquarters of Board of Control of Cricket (BCCI) in Wankhade stadium. According to reports in Mumbai Mirror, notices were sent to BCCI Chief Executive Officer (CEO) Rahul Johri and Chief Finance Officer (CFO) Santosh Rangnekar.

Johri and Rangnekar have also been asked to appear in personal hearing at the IT department office, Charni road at 3pm on Monday. The search was related to TDS deduction and statement received by the Income Tax department by the BCCI. There are crores paid by BCCI every year as TDS for various payments.

This has raised a question on Rangnekar’s role in the whole scenario as he excused himself in the evening of the survey and went to attend IPL retention programme in Bandra. He was back in the office at 9 pm after called by an I-T official.

When Rangnekar was asked about the survey he said it being ‘normal’.

Rangnekar made news recently for alleging before the Supreme Court of receiving death threats from BCCI treasurer Anirudh Chaudhry. Wriddhiman Saha takes most catches for India in away Test 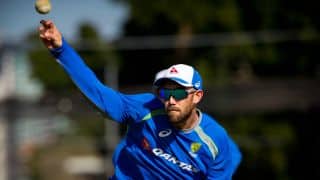