Johri concluded by stating that if full disclosures are made, Ganguly, for his "vast knowledge", should be allowed to continue.

BCCI Ombudsman Justice (Retd) DK Jain has summoned Sourav Ganguly for a hearing on April 20 over an alleged Conflict of Interest situation arising out of his dual role as Cricket Association of Bengal president and Indian Premier League (IPL 2019) Delhi Capitals advisor.

Coincidentally, Delhi Capitals are scheduled to play Kings XI Punjab at the Feroz Shah Kotla on April 20. The Committee of Administrators (CoA), through BCCI CEO Rahul Johri, has requested the Ombudsman “to allow” Ganguly to continue in his dual role, provided he makes “full disclosures” of his interests.

However, the BCCI note also stated that the Ombudsman needs to “examine” Ganguly’s dual role as “member of Cricket Advisory Committee (CAC)” as well as DC advisor.

Three Bengal-based cricket fans Bhaswati Shantua, Abhijeet Mukherjee and Ranjit Seal had alleged that Ganguly’s duty as a state association president is in direct conflict with his role as an advisor of an IPL franchise. (ALSO READ: Facing conflict of interest allegations, Ganguly conducts DC training, to sit in dugout)

“The parties may appear before the Ethics Officer, BCCI for a personal hearing on 20.4.2019 at 11 am, at New Delhi at the venue, which shall be communicated by the BCCI to the parties herein, by email, on or before 19.4.2019,” Justice Jain intimated to Ganguly’s legal counsel in an email.

Justice Jain has also summoned Shantua, Seal and Mukherjee for depositions in person as per principles of natural justice.

The former India captain, in a written affidavit through his legal counsel, had refuted the charge. “If the parties fail to appear before the Ethics Officer on the said date, it will be presumed that the Parties do not wish to avail of the opportunity of personal hearing, and the Ethics Officer shall proceed to decide the Complaint on the basis of the responses of the parties filed by the parties by 20.4.2019,” the Ombudsman wrote.

“There is a grey area in the examples of Conflict of Interest stated in the constitution,” a senior BCCI official said.

Johri in his letter quoted Rule 38(4) of the BCCI Constitution that states that “one individual cannot occupy the posts of “Office Bearer of a Member” and be in “governance, management or employment of a Franchisee” at a single point of time. Therefore, an instance of conflict of interest could be said to have arisen.” (ALSO READ: Everyone is human, what stands out is Dhoni’s competitiveness: Sourav Ganguly)

At the same time though, the BCCI CEO made it clear that there is no “straitjacket formula which can be applied”.

“Therefore, after examining the role and responsibilities of Mr. Ganguly as President of the CAB in conjunction with his role as advisor to the Delhi Capitals franchisee, a decision in this regard may be taken.

“Similarly, Mr. Ganguly’s role as a member of the CAC in addition to being an advisor to the Delhi Capitals franchisee may be examined to see whether the conflict of interest is tractable or intractable.”

Johri concluded by stating that if full disclosures are made, Ganguly, for his “vast knowledge”, should be allowed to continue.

“If it is found that the Conflict of Interest can be resolved by full disclosure and by direction to the concerned individual to recuse himself from performing such functions vested in him which are in any way connected with or associated with his other role/post, Mr. Ganguly may be permitted to perform all his current roles since his cricketing knowledge and experience is invaluable for the development of the talent and game of cricket in India.

“The BCCI will be guided by any decision taken by your good self on this matter,” Johri stated in the mail. IPL 2019: Jofra Archer ends Gayle storm as RR fight back at the end of the Powerplay 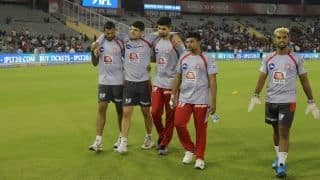