Heaping praise on Kumble, Khanna insisted that the Indian team performed extremely well under the former and the evidence of same could be given with the fact that the Virat Kohli-led side achieved No.1 Test rankings under him.

New Delhi [India]: A day after Anil Kumble stepped down from the post of Indian cricket team‘s head coach, Board of Control for Cricket in India (BCCI) acting president C.K Khanna on Wednesday expressed hope that the former cricketer continues his association with Indian cricket in any way possible. Heaping praise on Kumble, Khanna insisted that the Indian team performed extremely well under the former and the evidence of same could be given with the fact that the Virat Kohli-led side achieved No.1 Test rankings under him. READ: A look at India s performance in Anil Kumble s tenure as head coach

“I would like to appreciate Anil Kumble. Under him, the Indian team performed very well and achieved No. 1 position in the Test rankings. We hope that he will be connected to Indian cricket in any way possible. I wish him all the very best for his future assignments,” Khanna said in an exclusive conversation with ANI. The BCCI has deputed its general manager Dr M.V. Sridhar to supervise the team management for the West Indies tour. Meanwhile, Sanjay Bangar, and R Sridhar, will continue to remain the Batting Coach and the Fielding Coach, respectively.

Khanna also remained hopeful that the Indian team will continue to perform well even under interim arrangements.

“Indian team has proceeded to West Indies with the interim management and Dr MV Sridhar who will look after the arrangements. Sanjay Bangar is the batting coach and R Sridhar is a fielding coach. They will assist the Indian team. I hope that the team will do well,” he added.

The BCCI acting president also confirmed that the Cricket Advisory Committee (CAC), comprising former cricketers, Sachin Tendulkar, Sourav Ganguly and VVS Laxman, are in constant contact with each other over the appointment of a new coach.

“As far as appointment of new coach is concerned, the Cricket Advisory Committee (CAC) members are in constant touch with each other, As soon as they will recommend, BCCI will take the call. And the final call is of CAC only,” Khanna said.

Earlier, Kumble informed that skipper Virat Kohli had reservations about his work ‘style’ and his extension as the head coach, which prompted him to resign.

In a strongly worded letter, Kumble took to Twitter to reveal the reason behind his surprising decision.

Kumble said that although the BCCI had, several times, attempted to resolve the misunderstandings between him and the captain, it was apparent that the partnership was untenable, and, therefore he had decided to move on.

However, Kohli, before India’s opening encounter at the Champions Trophy against Pakistan rejected the reports of him having rift with the head coach, saying they were mere speculations which have been created by the people.

Kumble was appointed coach in June 2016 for a one-year term by the CAC and was instantly successful. Under him, India won Test series against West Indies, New Zealand, England, Bangladesh and Australia.

And he was being considered the front-runner for an extension till the 2019 World Cup, with Team India having won almost every series under him in the past one year.

It was reported that the three-member CAC, who are tasked to find the new coach for the Indian cricket team, was willing to retain the legendary leg-spinner for the post.

The BCCI has already invited applications for the position. 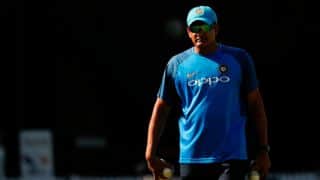 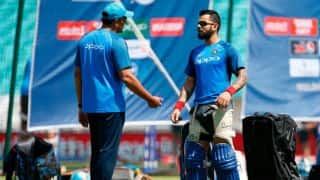