All the three accused cricketers had to spend time in jail during the course of investigation.

New Delhi: The BCCI on Wednesday made it very clear that it was not having second thoughts on revoking the ban on former India pacer S Sreesanth and spinner Ankeet Chavan in the wake of a Delhi Court dropping all charges against them in the IPL 2013 spot-fixing case. All the 36 accused persons including Sreesanth, Chavan and Ajit Chandila were discharged in the Indian Premier League-6 spot fixing case by Patiala House Court in New Delhi last week but the Indian board had refused to lift their ongoing ban. READ: Sourav Ganguly backs BCCI’s conflict of interest agreement

The Kerala Cricket Association, state board of cricket of the south Indian state of Kerala, had made a plea to the Board of Control for Cricket in India (BCCI) for allowing Sreesanth to play again but Thakur said there will be no rethink on the life ban of the two cricketers.
“The earlier decision of BCCI’s disclipinary commitee ban on this case will stay on,” Thakur told reporters.
“Disciplinary proceedings are different, criminal proceedings are different. The action taken in the past were based on the disciplinary action for the indiscipline of these players, reports submmitted by the the anti-corruption unit. So the same decision of ban will continue on these players,” he added. READ: Sreesanth: Want my daughter to know me as cricketer, not terrorist

All the three accused cricketers had to spend time in jail during the course of investigation. Of the three, Sreesanth and Chavan are currently serving life bans imposed by the BCCI after the scandal shook the high-profile league, while Chandila’s hearing is still on. 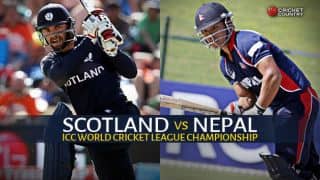