The 35-year-old sustained a fracture on the ring finger of his right hand during the historic Day/Night Test against Bangladesh in Kolkata in November and consequently underwent a surgery in Mumbai. India wicketkeeper-batsman Wriddhiman Saha, who is recovering from a finger surgery, has not been granted permission by the Board of Control for Cricket in India (BCCI) to play Bengal’s next Ranji Trophy match since the team management want him to be ready for the upcoming Test series in New Zealand.

The 35-year-old sustained a fracture on the ring finger of his right hand during the historic Day/Night Test against Bangladesh in Kolkata in November and consequently underwent a surgery in Mumbai.

“Wriddhi will not be available for Delhi match (at Eden Gardens from Sunday). I think the Board (BCCI) has said no to him,” Bengal coach Arun Lal was quoted as saying by PTI on Tuesday after they scripted an innings and 303 win over Hyderabad to brighten their qualifying hopes.

“It’s great to have him but it will not make any difference. In any case we have got a winning side. It’s okay it would have been for just one game,” Lal said.

Saha had his rehab at the National Cricket Academy. The two-Test series in New Zealand begins on February 21.

Earlier, the BCCI had also made exception for India pace spearhead Jasprit Bumrah as he did not have to prove his fitness during the Ranji Trophy match between Gujarat and Kerala and straightway made a comeback from a lower back injury in the T20I series against Sri Lanka.

Bengal will also miss their skipper Abhimanyu Easwaran and pacer Ishan Porel who have been drafted into the India A side for the series in New Zealand. 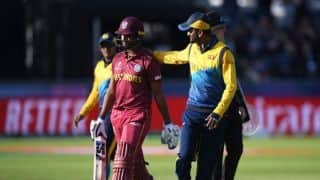