The BCCI committee on Lodha Reforms today included demarcation of functions performed by honorary office-bearers and paid professionals to the list of reservations it has about the implementation of the Supreme Court order.

Mumbai: The BCCI committee on Lodha Reforms today included demarcation of functions performed by honorary office-bearers and paid professionals to the list of reservations it has about the implementation of the Supreme Court order. The other three points are ‘One State One Vote’, Cooling off period of three years after every tenure and also doing away with ‘Cooling off period’ for Apex Council members (as and when Lodha Reforms are implemented). ALSO READ: Anurag Thakur: Manohar personally dictated a portion of my affidavit

However, it was bad luck for ‘Special Invitee’ Niranjan Shah, whose demand for inclusion of the age cap of 70 years, didn’t figure in the four-point reservations. Also Jatin Paranjpe and Gagan Khoda’s chances of re-entry into the selection committee look dim as the five-member panel also does not figure in the priority list. However, the most notable point was the demand for segregation between office-bearers and paid professionals.

The role of an honorary secretary, which currently Amitabh Chaudhary is performing, is at times directly clashing with Chief Executive Officer (CEO) Rahul Johri. We have been able to reduce our reservations from seven to four points. One of the points is the dynamics involving powers and functions between office-bearers and professionals. That needs a review. That’s the view of special committee, Chaudhary told reporters without elaborating further.

In earlier regimes, the president, secretary and treasurer wielded a lot of power being executive functionaries with the supreme authority in decision making — both administrative and financial.

However, the Lodha reforms have suggested a lot of power being rested with the CEO.

Johri, in fact, had once convened a selection committee meeting at the behest of the Committee of Administrators (COA), something that didn’t go down well with the former Jharkhand top cop.

While Chaudhary has been convening meetings after that but there was lot of tension in the BCCI as it is the secretary, who has been the convenor of selection committee meetings.

On COA’s insistence, Johri has also been a part of a core group that dealt with the Anil Kumble-Virat Kohli controversy leading to former stepping down from his post.

On One State One Vote, Chaudhary said: “The special committee humbly considered all aspects of it and thought that the order putting into effect ‘One State One Vote’ may be reconsidered with a view that the present members of the BCCI continue to remain members at the same time enroll new members from the new members following due procedure so that’s our present prayer to the SC.” 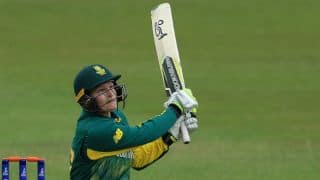