In the match-fixing case, S Sreesanth had to cool his heels in Delhi's Tihar jail in 2013.

Kochi: Tainted Indian speedster S Sreesanth has got a shocker from the Board of Control for Cricket in India (BCCI) with the apex body reiterating that the life ban imposed on him will stay. Sreesanth received the letter from the BCCI on Sunday after he submitted a review petition seeking the lifting of the life ban in view of his being exonerated by a Delhi court of the match-fixing allegations against him. In the match-fixing case, he had to cool his heels in Delhi’s Tihar jail in 2013. The BCCI’s letter, from CEO Rahul Johri, states that the Board is very particular in ensuring that discipline is maintained and there is nothing to change their September, 2013 decision of imposing a life ban on the bowler. BCCI issued notice by Kerala High Court over plea by S Sreesanth

The letter also mentions that the decision to impose the life ban was taken by a committee that had as members BCCI Vice President TC Mathew who was Kerala Cricket Association President and KCA secretary TN Ananthanarayanan. After Sreesanth approached the Kerala High Court in March this year with a petition seeking the lifting of the ban imposed by the BCCI, following a Delhi court exonerating him in the spot-fixing case, the court asked him to file a review petition before the BCCI. S Sreesanth urges Vinod Rai for revocation of ban

In 2015, the now 34-year-old pacer along with two other players was exonerated by the Delhi court in the case registered by the Delhi Police which invoked the Maharashtra Control of Organised Crime Act (MCOCA). On account of the life ban, the pacer cannot play even league cricket nor get access even for practice to any of the cricket grounds where the BCCI or the state cricket associations have a stake.

The BCCI Disciplinary Committee headed by present Union Finance Minister Arun Jaitley had slapped a life ban on Sreesanth. Sreesanth is just the second Keralite to represent the country and in his brief career he has played in 27 Tests taking 87 wickets, and picked up 75 scalps from 53 One-day Internationals (ODIs) and seven wickets from 10 Twenty20 Internationals (T20Is). 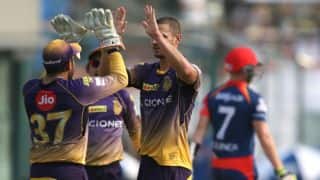