Mumbai: The fate of tainted cricketers Ajit Chandila and Hiken Shah will be decided by the Board of Control for Cricket in India (BCCI’s) Disciplinary Committee, headed by president Shashank Manohar on Monday, January 18. The three-man panel, also comprising Jyotiraditya Scindia and Niranjan Shah, is expected to pronounce a decision on former Pakistan umpire Asad Rauf, who too had been named in the 2013 IPL spot-fixing scandal, as well. Chandila and Shah appeared in person before the Committee on December 24 last and were given time till January 4 to file a written response to the charges against them. The Committee, then, also decided to issue a notice to Rauf to respond to the charges against him.

Earlier, PTI reported that decision on the fate of tainted cricketers Ajit Chandila and Hiken Shah, who have been charged with corruption, was on Tuesday postponed till January 18 by the Board of Control for Cricket in India (BCCI’s) disciplinary committee after the third accused in the matter — Pakistani umpire Asad Rauf — sought more time to present his case.

Chandila and Shah have already been questioned by the three-member committee, headed by President Shashank Manohar and comprising Jyotiraditya Scindya and Niranjan Shah. Rauf had been issued a notice by the panel to respond to the allegations against him. The official, who has been charge-sheeted in the spot-fixing case, was declared a “wanted accused” along with 15 bookies from Pakistan. 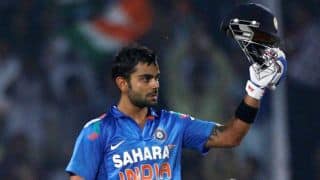 Virat Kohli: A role model for upcoming cricketers around the world