The BCCI decided to take all the "outstanding issues" concerning the aggrieved Sahara Group to its Working Committee meeting on Monday which is expected to give finishing touches to a compromise formula aimed at breaking the week-long stalemate. 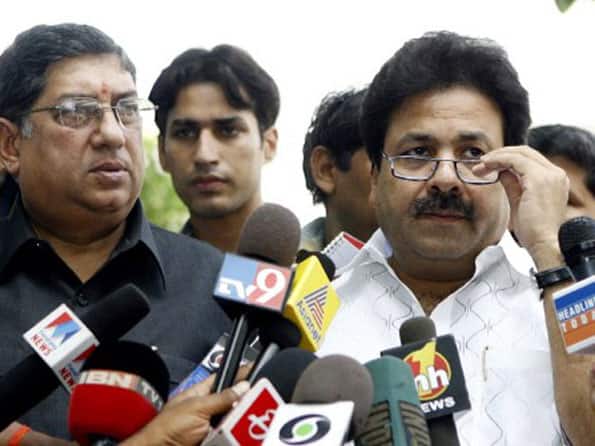 The BCCI decided to take all the “outstanding issues” concerning the aggrieved Sahara Group to its Working Committee meeting on Monday which is expected to give finishing touches to a compromise formula aimed at breaking the week-long stalemate.

The top brass of BCCI and Sahara, which had severed ties with the Board and had pulled out of the IPL, met on Sunday to discuss the contentious issues amid indications that a breakthrough has been achieved.

Both parties have agreed to discuss the matter further in BCCI Working Committee meeting in Chennai but did not disclose what transpired on Sunday’s crucial meeting.

The meeting, it is learnt, was held in a cordial atmosphere and both parties have made significant headway in breaking the stalemate which prompted the corporate giant to withdraw sponsorship of the Indian cricket team and also pull out of the IPL.

“Sahara and BCCI met today and discussed all the outstanding issues, and it was agreed that the subject will be further discussed in the BCCI Working Committee meeting tomorrow,” a joint statement issued after the meeting said.

“The interaction was focused on the interest of Indian cricket, including the IPL,” it added.

Sahara Group was headed by its supremo Subroto Roy while the BCCI President N Srinivasan, secretary Sanjay Jagdale, treasurer Ajay Shirke and IPL chief Rajiv Shukla represented the Board in the meeting which lasted almost one and a half hours.

A top source said that some of the decisions have to be now ratified by the Working Committee which meets in Chennai tomorrow.

“Since some of the decisions have to be ratified by the Working Committee, they were not announced today,” the source said.

It is also learnt that Sahara’s request to get fringe players from other franchises on loan could be considered after discussion with other teams and stakeholders.

The BCCI, as part of a compromise formula, has also shown a lot more flexibility in accommodating some of the genuine grievances but has requested Sahara to continue sponsoring the Indian cricket team till the end of its contract.

After the meeting, both the camps had internal meetings to chalk out the future course of action.

Sahara supremo Roy had a round of meeting with his close aides and top management of his IPL team Pune Warriors.

The BCCI top brass also met separately for a while. IPL Chairman Rajiv Shukla had a meeting with IPL CEO Sundar Raman.

Sahara, sponsor of the Indian team for over 11 years, decided to part ways with the BCCI on February 4, complaining that the Board did not give due consideration to its genuine grievances with regards to players and number of matches in the IPL. The decision to severe all tied with BCCI was taken just hours before the IPL auction got underway in Bangalore.

Sahara had signed a renewed sponsorship agreement with the BCCI on July 1, 2010 till December 31, 2013 and was paying Rs 3.34 crore per Test match, one-day international and Twenty20 International under the new terms. The deal is said to be worth Rs 532 crore.

The BCCI stands to lose close to 2000 crore crore if no solution is found. However, the Board can find another sponsor to neutralise the losses.

The bone of contention was Sahara seeking a replacement for Yuvraj Singh who is undergoing treatment for a malignant lung tumour in the United States. The franchise wanted that Yuvraj’s salary of USD 1.8 million be added to their kitty of USD 1.6 million after they spent USD 400,000 on retaining Sourav Ganguly.

The BCCI also turned down their requests of getting the first right of draft as well as Ganguly being inducted as Yuvraj’s replacement so that they can go into auction with USD 2 million.

Another major issue was that Sahara had bought the franchise under the condition that 94 matches will be played but the league has been subsequently reduced to 74 matches.

Sahara wants a refund for the reduced matches.(PTI)