Hyderabad skipper Ambati Rayudu had opposed the decision. Little did he know that those two runs would bring his team to the doorstep of defeat.

Hyderabad elected to field first against Karnataka in Syed Mushtaq Ali Trophy 2018. Karnataka posted a huge total of 205 against Hyderabad: Karun Nair (77) and Krishnappa Gowtham (57) added 131 runs together. Hyderabad eventually lost the match by a mere 2 runs. There, however, is more to the match.

In the last over of Karnataka s innings, Vinay Kumar hit the ball to the ropes; it was stopped by the fielder, but no one noticed that he had touched the ropes and that it was a boundary. Vinay Kumar later was told about it during the break. He then had a 10-minute discussion with umpires, and extra two runs were added to the Karnataka’s total.

The BCCI has taken cognizance of the events that unfolded during and after the Syed Mushtaq Ali Trophy 2018 match today between Hyderabad-Karnataka. An official report by the Match Referee is awaited, following which appropriate action as per BCCI s Code of Conduct will be taken

Hyderabad skipper Ambati Rayudu had opposed the decision. Little did he know that those two runs would bring his team to the doorstep of defeat.

BCCI, however, have tweeted on the issue saying that they will look into the issue as they await the official report form match referee. 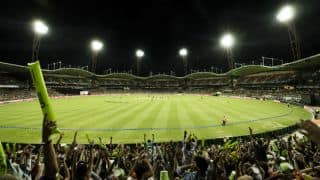