The meeting will take place on August 28.

Mumbai: The Board of Control for Cricket in India (BCCI) Working Committee will meet in Kolkata on August 28 to discuss, among other things, the report and recommendations of the IPL Working Group headed by Rajiv Shukla. “The notice for the working committee meeting to be held in Kolkata on August 28 has been received,” said Dr P V Shetty, joint secretary of the Mumbai Cricket Association (MCA) which is one of the permanent members of the BCCI’s Working Committee. The IPL Working Group comprising Shukla, BCCI secretary Anurag Thakur, treasurer Anirudh Chaudhary and former India skipper Sourav Ganguly as its members along with the Board’s legal adviser U N Banerjee, was given six weeks’ time on July 20 to study Justice R M Lodha Committee’s order and give its recommendations and road-map for next year’s IPL. READ: Sports Minister urges BCCI to be more accountable and transparent

The decision to form a Working Group was taken at the IPL Governing Council meeting in Mumbai last month where members discussed the Justice Lodha Committee’s order, suspending Chennai Super Kings and Rajasthan Royals for two years from the IPL. The Justice Lodha Committee was constituted by the Supreme Court in January this year to announce the quantum of punishment against Gurunath Meiyappan, the former team principal of CSK, Raj Kundra, co-owner of the Rajasthan Royals, and the two franchisees — India Cements Ltd, owner of CSK, and Jaipur IPL, owner of the Royals.

The IPL Working Group has, since then, met all the stakeholders of IPL, including the six other franchise teams’ owners, in Delhi and Mumbai and the deadline for submitting its report and recommendations to the BCCI is July 31.

First Published on
Last updated on August 15, 2015 3:20 PM IST
TOPICS:
BCCI Board of Control for Cricket in India Rajiv Shukla 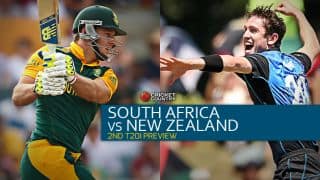