Chennai Super Kings and Rajasthan Royals will not be terminated, the Board of Control for Cricket in India (BCCI) declared on Sunday after their working committee meeting in Mumbai. The Annual General Meeting of the BCCI will be held on Monday at the BCCI Headquarters, again in the same city. The board announced that the Justice Lodha committee interim report will be implemented fully. BCCI will float tenders and invite bids for two new teams to replace CSK & RR in the Indian Premier League for 2016 and 2017 (2 years). The Treasurer’s Office will start operations from the headquarters at the earliest. READ: Chennai Super Kings, Rajasthan Royals face no immediate termination

According to BCCI’s press release, M/ S Gokhale & Sathe has been appointed as the internal auditors of the BCCI. They replace M/S P.B Vijayragahavan & Company. The Board has appointed M/S Deloitte for ‘Project Transformation’. Meanwhile, they have appointed M/S Price Water House Cooper as the independent agency to due the diligence for the utilisation of funds provided by BCCI to the state associations.

The revival of the National Cricket Academy as the centre of excellence is the top most priority of the BCCI. Board will look at the lands offered by KIADB. Mr. MP Pandove (Chairman NCA ), Mr. Rajeev Shukla, Mr. Anirudh Chaudhry (Hon.Treasurer-BCCI) and Mr. Amitabh Choudhary (Joint Secretary – BCCI) will inspect the lands offered by KIADB and finalise the deal within one month. READ: BCCI set to discuss future of CSK, Rajasthan Royals at the working committee meeting

BCCI rules regarding conflict of interest and the amendments to the Rules and Regulations of the Board are being proposed for the consideration at the Annual General Meeting. Nike Contract as the official apparel sponsors of the Indian Cricket Team has been extended. The IPL title sponsorship right has been assigned to M/S Vivo mobiles. Vivo is to give the Bank Guarantee in next ten days. 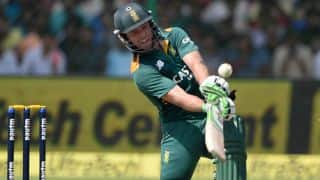