Board of Cricket Council of India's (BCCI) Anti Corruption Unit (ACU) chief Neeraj Kumar on Saturday said that no evidence was found against the two named Indians in the alleged Ashes spot-fixing case.

Board of Cricket Council of India‘s (BCCI) Anti Corruption Unit (ACU) chief Neeraj Kumar on Saturday said that no evidence was found against the two named Indians in the alleged Ashes spot-fixing case.

Kumar’s comments come in the backdrop of claims made by U.K. publication ‘The Sun’ that two Indian bookies, Sobers Joban and Priyank Saxena, from Delhi, attempted to spot-fix the third Test at Perth.

Speaking to ANI on the matter, Kumar said, “There has been no fixing, there are claims made against the two by Sun reporters.”

He added, “These two [Sobers Joban and Priyank Saxena] are in our radar and they are known to us for quite some time. They are persons of interest. But since no crime has been committed as yet so no legal action can be taken by either the English Police or Australian Police or us.”

Earlier, International Cricket Council (ICC) anti-corruption general manager Alex Marshall had also said that so far no evidence has been discovered to support the alleged sport fixing of the third Ashes.

However, the ICC said that suitable investigation will be commenced in the matter.

Asked if ICC and BCCI are in touch, the ACU chief said, “ICC is in touch with us, they are aware that these two people are in our record. And we have offered to them that if in the course of their investigation they need our help, we are always willing to extend our assistance to them.”

He notified that no evidences of fixing have been found against the two Indians, however, there is evidence of them being suspicious.

“They are persons of interests who should be avoided by aspiring cricketers because they have the potential to indulge in corrupt practices,” he said. 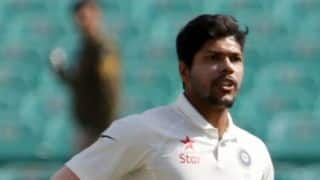